Glocal Camp, Civic Innovation School and Project Governance are the working groups of today. At the same time, Pascual Pérez and Alfonso Sánchez Uzabal are in charge of the workshop on CivicTech held in Atlas. It is Alfonso, programmer, architect and member of the Montera34 collective who answers these questions: 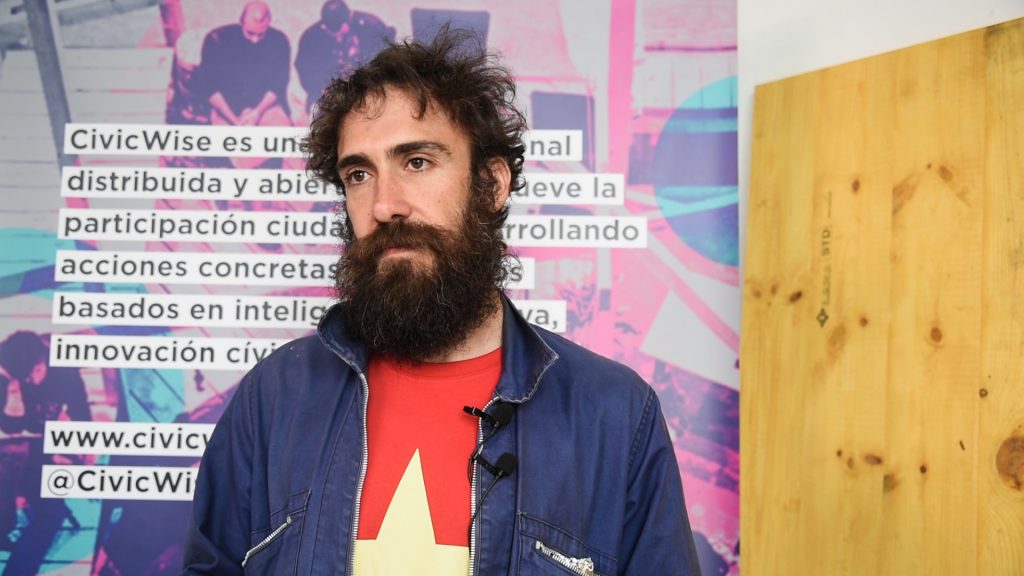 What do we mean by civic technology?

It has a lot to do with free software and the way we relate to this type of technology. It also shares symbolism with the digital commons, with the open, the free and the distributed. The management model he plans is always civic, citizen and intimately linked to a territory. The use of civic technology is not only a change of tool but also of paradigm. It changes both the way we relate to technology and the environment in which it is being used. The parameters to assess the confidence of the processes developed with this technology must be different. This concept of `trust’ is very much based on the community around this technology, where a relationship of co-responsibility is established: you are no longer a customer or consumer of this technology because it ceases to be a service and becomes an active part of its use and development.

How can we avoid the phagocytisation by the large business conglomerates of these generated commons?

For some years now, civic reality has been confronted with the public reality of the administration or private sector, and each time we see that the scenario is a mixture of these three actors (the private, the public, and the citizenry) working together and managing civic technology in a common way. Take the example of Wikipedia: the contribution in content comes from a huge community. The economic sector, on the other hand, comes 80% from private companies. This triad is the most efficient way to avoid that phagocyte buildup. There are also legal mechanisms that have been developed for 30 years, such as free licenses. Since the 80s, they have allowed the release of technology, content or code under a series of conditions that do not allow the appropriation of these products.

“No tool we use is neutral,” Pascual recalled in the workshop. Are we aware of this?

Planned obsolescence is another good example of this. The way objects are designed and constructed, the materials used and other decisions are never neutral. It is not the same to think and create objects that will last 50 years or others that will last only two years. These decisions are political and will have social and economic consequences. Facebook, for example, has its mechanisms to guide us within its interface. It’s free because it doesn’t cost money even though we pay for it with our data. It creates a user-consumer relationship, there is no process of co-responsibility with the technology or of decisions taken collectively between users. Not even a thought about whether I’m only using this technology because someone is offering it for free. It is the tyranny of the tool, which we talked about in the workshop: when you are offered tools in this form, and you consume them (more than you use them) we are generating dependency relationships with those tools. Another case is Mac computers: they give you a very effective working tool, but once you enter it, it’s very difficult to get out of it, because it’s closed. You can’t connect to other systems or technologies because Apple creates imprisoned users. 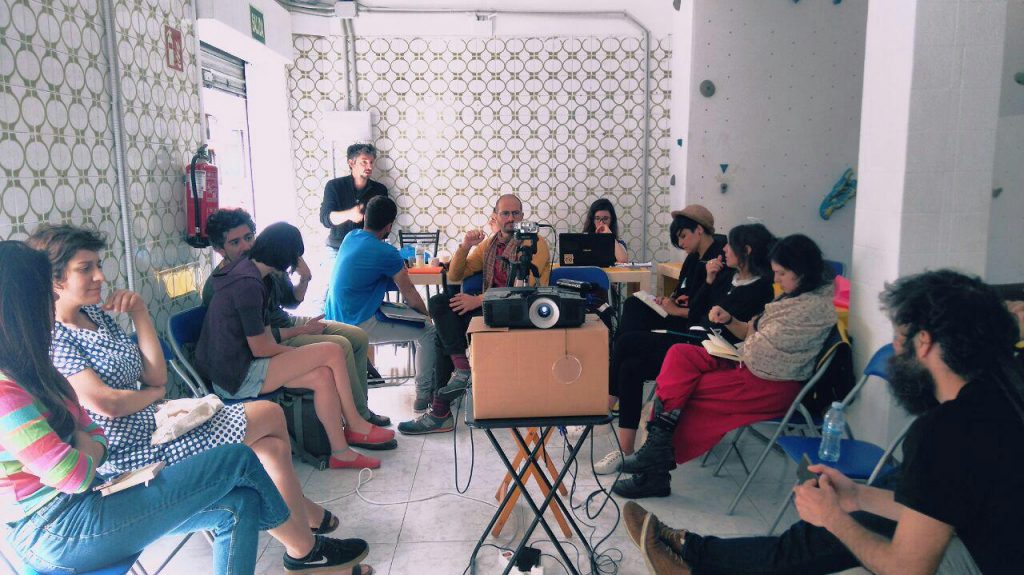 The workshop session began with the telling of ten stories about free software:

1. Richard Stallman, when he was working at MIT, wanted to modify certain parts of the code of the operating system he works with. He asked for it and was denied it; so he decided to reprogram everything from scratch and GNU was born. It is an example that when we do not have the code we are subject to the tyranny of the tool.

2. The Berlin bike system. The German capital makes a different model from Paris or Madrid, where you have to find a base and follow a protocol to take the bike. However, in Berlin you can find them anywhere in the city. The map of where each bike is located is made up according to where the citizens leave them. This changes the way the city is lived. Problems with centralised systems are saved because every bike is a base here. You send an SMS to the phone it says and you can unlock it. If one breaks down, the rest of the system will still work. It’s a distributed system, like the Internet. Any node in that network is expendable: we can remove it and the network will continue to function.

3. Nuclear energy does, of course. Solar energy can be decentralized and distributed. No one could have a nuclear power base in their home. The curious thing here is that the debate is eliminated, because it allows only one management model. The technology and the tool is not neutral: it is associated with a management model and possibilities of use. We can talk about nuclear energy from an ecological perspective, or from the perspective of power: centralised, as in the case of nuclear energy, or distributed, in each house that has its own solar panel. Nuclear technology also has a series of control mechanisms associated with it that are unnecessary in the case of solar technology, so the social organization that is generated around one and the other is completely different.

4. Buy Twitter. A citizens’ initiative: Twitter is a great idea, if what we don’t like is the owner, why don’t we change it? It’s a matter of telling Twitter shareholders that we users want to buy it to decide how our data is used, what the business model is, etc. It’s an example of how open source models can be applied to management.

5. Robert Moses, the tyranny of tool and technology as power. Langdon Winner told it in his book The Whale and the Reactor. The bridges over the avenues of Long Island, New York, have a roof low enough to prevent buses from entering, thanks to the designs of architect Robert Moses so that only car owners, usually white and middle-class people, could access the parks and beaches. This limited access to racial minorities and disadvantaged social groups.

6. “Wrong house gets torn down based on a Google Maps error” Google Maps also fails. How does a cartography, which is a representation of reality, become real? Why is it subjective and monopolized by no one? Google Maps undoubtedly has a monopoly on the representation of reality. If something is changed in Google Maps, this change changes the reality. In the 2000 Google Maps did not give information about Argentina because they did not reach an agreement with the government until 2007. At the other end of the spectrum is Open street maps, where citizens upload and modify data.

7. AirBnB effect. The Montera34 collective analyses the AirBnB effect in cities. The municipalities already have studies on how tourism affects the cities; the difference is that the companies to which they were commissioned only give them the conclusions and not the data; it does not open the source for them to draw their own conclusions, or so that they themselves can continue the research based on these data. Or even for citizens to draw these conclusions. Montera34, on the other hand, releases these data. “Our representation of reality may be interesting, but it is only one; what is interesting is that there are several representations to understand these complexities,” says Alfonso.

8. Consul: co-learning, mutualisation, sharing. Consul – the free software for citizen participation created by the Madrid City Council and already replicated by some 60 institutions around the world – is an example of the power of freeing a tool. “If it were a private company, we would depend on agreements,” says Pascual, on whether or not some local councils could accede ( that is, it would entail economic or political conditioning factors). It is a tool for democratic deepening in all senses. Other users can complement and improve their code and do not depend on that someone who commands the tool.

9. Humanitarian Open Street Map Team. It is the largest citizen network in the world. First they used it in Haiti. Private enterprise is not interested in doing anything that it cannot profit from. The only one that can respond in real time to certain humanitarian crisis situations, as happened in Haiti, is civil society. 100 volunteers arrived with GPS devices and in 4 days they mapped the area after the earthquake and uploaded it to the Open Street Map. “It is an example of what organised civil society can do,” says Alfonso. In fact, at the time, companies like Yahoo released data about the country to make it easier for volunteers to work, something that would not have happened if another private company had been at the forefront of the process.

10. Fablabs: global territory, globalizing design, localizing production… Normally the opposite is true: you design here and produce in China or Bangladesh. Pascual proposes examples of how to centralise production in our territories and that, instead, design tasks can be done globally: something designed in Madrid can be printed in Paris thanks to these spaces of citizen manufacture that are the Fablabs. 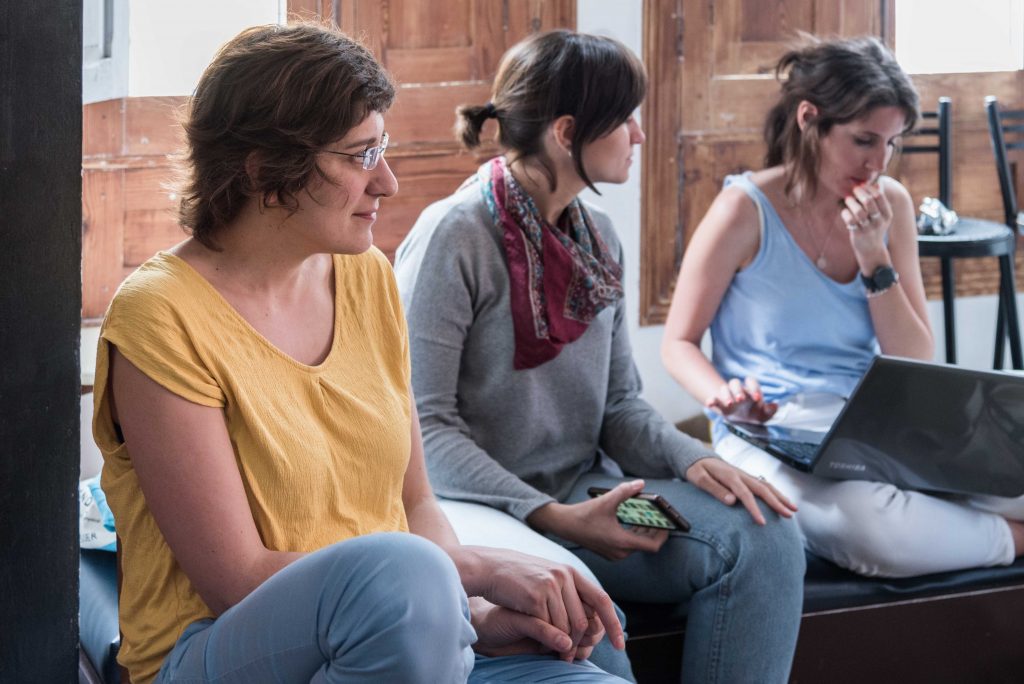